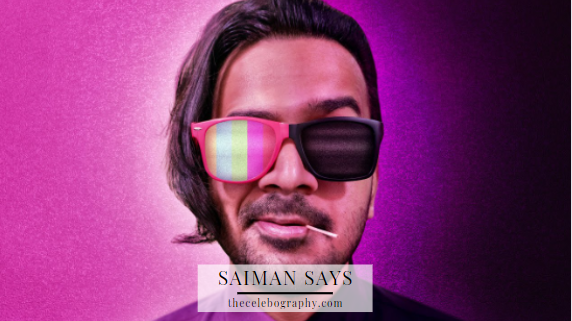 Saiman Says is an Indian YouTuber Saiman Waghdhare is best known for his PewDiePie billboard stunt in India. His parodic humor and half-pants during the wintertime make him popular among fans of the PewDiePie phenomenon. He generally reacts to memes posted on Reddit. Timothy, his imaginary friend, has inspired him to share his workout routine on his channel. Saiman Says is a very popular Youtuber with over 700k subscribers on youtube.

He is recently living in Mumbai. His real name is Saimandar Waghdhare.

Saiman’s mother tongue is Marathi and he can also speak Gujarati, Hindi, and English fluently.

There is also a game on him called Saiman Says game.

He has also worked as a production assistant for a show on the Colors TV channel.

Before his start on the youtube channel, ‘Saiman Says’. S.says is widely known as Saimandar is a quite famous Indian Youtuber, who is widely known for his criticizing comedy style.

He does not only upload roasting videos or funny interviews. He also provides informational videos like vlogs.

So we can say that he is the pure Pwediepie of India.

He is 5 feet and 7 inches tall and his weight is 70kg. In his free time, Saiman likes to do video creation and hobbies as acting.

He has graduated from St Xavier College in Mumbai with a Bachelor’s degree in Mass Media in the year 2016.

He has also worked as a Production Assistant at the Blue Apple Digimedia from the years 2015 to 2016.

He has also worked as an intern in the theater. Before his joining in Colors channel as a production assistant for a famous Television show called Aunty Boli Lagao.

He is a full-time Youtuber now and he is known for his youtube channel called Saiman Says.

However, He says he has other talents as well such as Social media management, video production like video editing, pre and post video production, etc. He is a very good actor and also is a great Voice artist.

He is the one and only creator of India and collaborated with Pwediepie.

Says has a big fanbase not only in India but also in the whole world.

It tells how much he has worked hard to achieve it.
In the year 2020, he has 777k subscribers and 70 million views on his channel.

Till today’s date, there are 750k+ subscribers on his youtube channel along with 7 Crores or 70 million views.

Till now, we don’t have much information about his says family, father, etc.

However, we now know that he has three school friends. The name of one of his friends is Aditya which is told by him in his videos.

YouTuber Saiman Says is a big fan of PewDiePie. He is a famous creator who has a massive fan base on every Social Media account. He is fully active on his Instagram account. People love his content and his amazing personality

The Net worth and Earning of Saiman

According to the social blade, the earning and net worth of Saiman is not confirmed.

Because there is no real net worth of S.Says available on the Internet so far.

So, the estimated net worth of his is Rs.12 lakhs to14 lakhs. As soon as the official Net worth of Saiman Says will come out then we will update it.