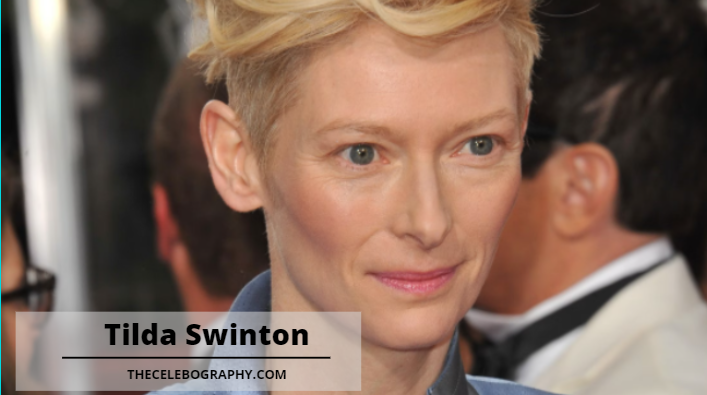 Tilda Swinton is born on 5 November 1960 is a London, England. Known for her roles in independent films and blockbusters, she has received various accolades, including an Academy Award and a British Academy Film Award, in addition to nominations for three Golden Globe Awards. Her parents are from England and were both retired major generals in the British Army. She grew up in a middle-class family with three brothers. Swinton’s education began at a young age and she attended three separate schools, including a private boarding school.

Her experience at West Heath Girls’ School was rather sour, though she later went to Murray Edwards College at the University of Cambridge, where she earned a degree in social and political sciences.

During her college years, Tilda Swinton joined the Communist Party and the Scottish Socialist Party. She also created the Ballerina Ballroom Cinema of Dreams in 2008, a film set in a Scottish ballroom. She also appeared in an outdoor video installation, “SONG 1”, by Scottish artist Doug Aitken.

Her age and appearance in this film were among the factors that earned Swinton the honor of being named one of the 50 best-dressed women over fifty by The Guardian. She also regularly makes appearances on International Best Dressed lists.

Swinton is a daughter of Judith Balfour (née Killen; 1929–2012) and Sir John Swinton (1925–2018), the Laird of Kimmerghame House. She has three brothers. Her father was a retired major general in the British Army and was Lord Lieutenant of Berwickshire from 1989 to 2000.

Swinton considers herself “first and foremost” a Scot. Swinton attended three independent schools: Queen’s Gate School in London, the West Heath Girls’ School and also Fettes College for a brief period. West Heath was a boarding school where she was a classmate and friend of Lady Diana Spencer, the future Princess of Wales.

As an adult, Swinton has spoken out against boarding schools, stating that West Heath was “a very lonely and isolating environment” and that she thinks boarding schools “are a very cruel setting in which to grow up and I don’t feel children benefit from that type of education. Children need their parents and the love parents can provide.

Swinton spent two years as a volunteer in South Africa and Kenya before University. In 1983, Swinton graduated from New Hall at the University of Cambridge with a degree in social and political sciences. While at Cambridge, she joined the Communist Party. she later joined the Scottish Socialist Party. It was in college that Swinton began performing on stage.

Swinton began to gravitate toward jobs in mainstream cinema in the 2000s. She starred in Danny Boyle’s adventure film “The Beach,” the thrillers “The Deep End” and “Vanilla Sky,” and the Spike Jonze dramedy “Adaptation” at the turn of the century. Swinton rose to international prominence in 2005 after parts in “Teknolust,” “The Statement,” and “Young Adam.

She acted in four films that year, including the critically acclaimed independent films “Broken Flowers” and “Thumbsucker,” as well as the blockbuster fantasy feature “The Chronicles of Narnia: The Lion, the Witch, and the Wardrobe,” in which she played the terrifying White Witch.

Swinton’s reputation rose further in 2007 when she starred as the general counsel of a corrupt agricultural company in the courtroom thriller “Michael Clayton.” Swinton earned the Academy Award for Best Supporting Actress for her portrayal in the film, which starred George Clooney and Tom Wilkinson.

Tilda Swinton is an acclaimed actress who has been in a variety of mainstream and independent films. Whether it’s her role in the classic Chronicles of Narnia series, the sequels, or her Oscar-winning performance in Michael Clayton, Tilda Swinton has made an impression on filmgoers. Her varied filmography includes a range of roles, including indie movies like We Need to Talk About Kevin, Snowpiercer, and The Zero Theorem. She has also worked with directors like Luca Guadagnino and Bela Tarr, among others.

Tilda Swinton’s filmography is varied, and many of her best performances can be found in comedies and dramas. Her role as The Ancient One in the 2016 thriller Inferno is one of her best, and she’s won numerous awards for her performance. Tilda Swinton’s latest film, Avengers: Endgame, is the most recent film in her filmography. It concludes a larger story arc in which the infinity stones are destroyed. It’s an ensemble cast, bringing together all of the major characters from the MCU.

The estimated net worth of Tilda Swinton is $14 million. Tilda Swinton is a British actress who has won an Oscar. She rose to prominence thanks to her appearances in films and television shows such as “Orlando,” “The Deep End,” “Michael Clayton,” “Julia,” “We Need to Talk About Kevin,” “Snowpiercer,” “The Grand Budapest Hotel,” Memoria,” and others.

According to various sources, as of 2022, her annual income is $1-2 million. The primary source of her income comes through movies, series, promotions, and brand collaborations.

Dimple Gola - May 24, 2022 0
Jun Ji-Hyun: She is a South Korean actress, commercial model, and television personality. She began her modeling career at age 16 when she was...