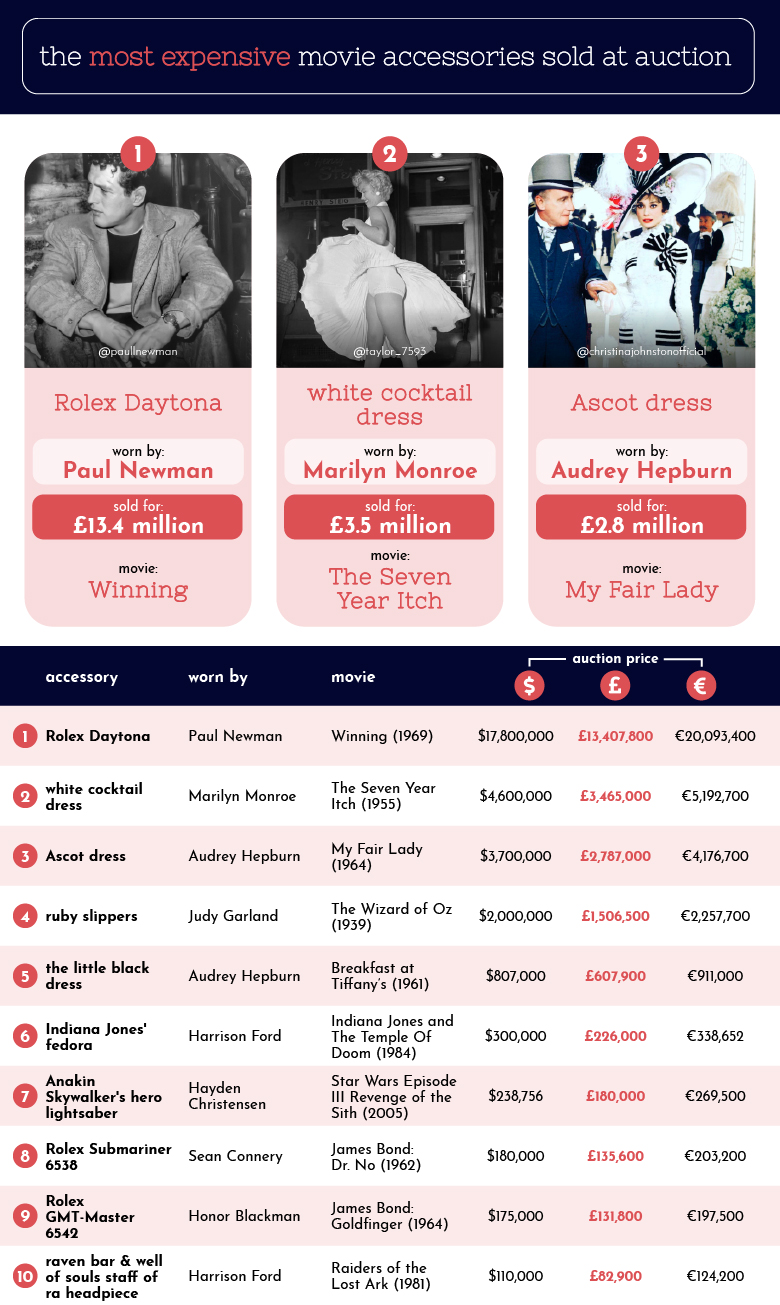 Items worn by A-list actors drum up plenty of cash, with buyers apparently willing to shell out a lot of money for jewelry, dresses and accessories worn by those celebrities on the silver screen.

According to Jewellerybox, an online jewelry retailer in London, the most expensive movie accessories sold at auction is the Rolex Daytona worn by Paul Newman in the film “Winning,” which sold for $17.8 million at auction. The watch was a piece in Newman’s personal collection, given to him by his wife Joanne Woodward in 1969 during the making of the film, and can be seen on-screen. It is engraved with the words, “Drive Carefully, Me.”

In second place is Marilyn Monroe’s white cocktail dress that she wore in “The Seven-Year Itch,” which brought in $4.6 million at auction. That famous dress was met with a gust of upward wind from a subway vent, making on-screen history.

Audrey Hepburn’s Ascot dress, which her character Eliza Doolittle wore at the Ascot Derby in “My Fair Lady,” garnered $3.7 million at auction. It was designed by British fashion designer Cecil Beaton and was owned by Debbie Reynolds who reportedly paid $100,000 for the piece.

In fourth place were Judy Garland’s ruby slippers, worn by her character Dorothy in the 1939 film “The Wizard of Oz,” which drummed up $2 million at auction. Rounding out the top five is the little black dress also worn by Hepburn in “Breakfast at Tiffany’s,” which garnered $807,000 at auction, according to Jewellerybox.

On the other end of the spectrum, the cheapest movie accessory to be sold at auction is Anthony Perkins’ Bates Motel keychain from Alfred Hitchcock’s iconic thriller “Psycho,” which sold for $210. The key was used to unlock room seven of the murder house motel run by Norman Bates. Sydney Prosser’s earrings worn by Amy Adams in “American Hustle” were auctioned for $225, while Vivien Leigh’s cameo brooch from “Gone With the Wind” went for $275.

The list of the most expensive movie accessories sold at auction was compiled using lists from Universityfox and Lifestyleasia. Further information on auction sale prices for movie props was sourced from Propstoreauction and eBay.