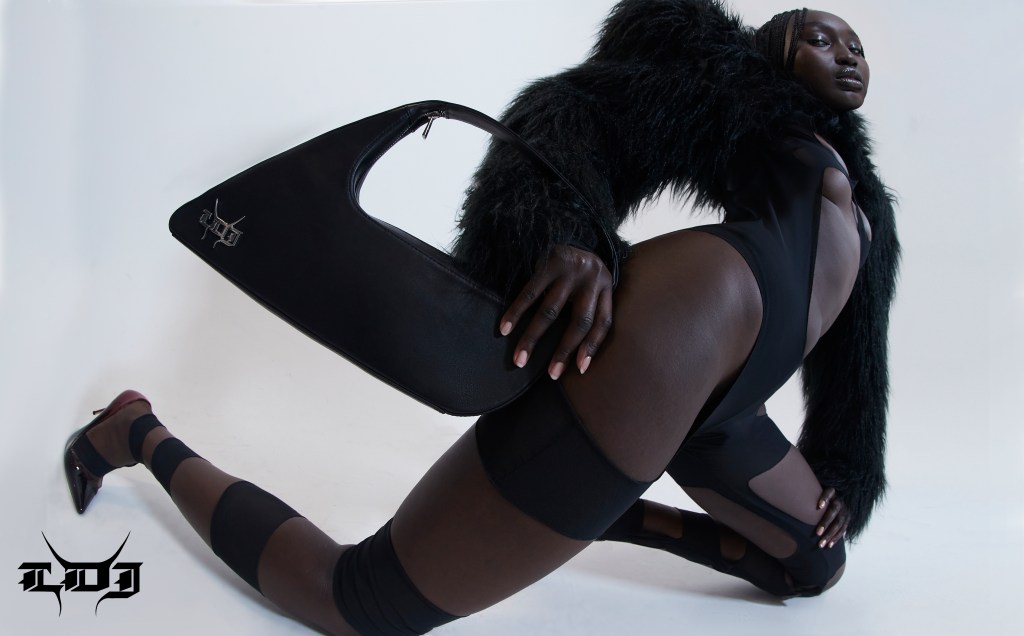 His penchant for sexy and daring garb puts him in the same space as other up-and-coming talents like Ludovic De Saint Sernin and Area’s duo, Beckett Fogg and Piotrek Panszczyk. The group of designers hailing from different backgrounds all share the same need to celebrate the human body, with a very Gen Z, no-compromise-accepted attitude.

“I’ve always been really drawn to that daring, skin-tight, showing the skin, very little clothes things, with a lot of technicalities to them,” De Javier told WWD over Zoom. “I remember my teacher going through my first sketchbook at fashion school and she was like ‘Oh OK, I see where you’re going’,” he remarked with a chuckle.

De Javier was born in Sitges, Spain’s “gay town” in the designer’s own words, which has had an enormous impact on his designs intended for the LGBTQ community he represents.

“I design for myself, based on myself and I know I’m not the only person in the world that thinks like myself and I want to make people feel good in the same things that make me feel good,” he explained.

De Javier is confident that his peers want to look and feel sexy as much as he does, either to attend a rave or go grocery shopping. Making a statement on sexuality and gender via clothing feels like acting as a loudspeaker for LGBTQ empowerment, in his view.

“It’s about just bringing to life those issues and those statements, to really spotlight the issues of a minority. Especially when I saw the type of people that this [brand] would get to, it became very important for me to highlight issues that people don’t really know about unless they’re part of it. And empowering queer people and women and anyone that wants to wear those clothes,” he offered.

After graduating at design school IED Barcelona, a branch of the University of Westminster, he enrolled for a traineeship at Vivienne Westwood and relocated to London, where he also had stints at Gareth Pugh.

He launched his namesake brand by chance in September 2019 with a small show a friend of his was orchestrating to showcase London’s underground fashion talents. He had prepped six looks from his graduate collection but was asked to more than double their number.

“When I did that and I managed to do all the looks on time, after that show I was like ‘Oh my god, this can actually happen,’” De Javier said.

What came next was a ripple effect full of surprises, he admitted.

In February 2020, he was able to host his first solo show, with little to no budget and an army of friends who came to the rescue just for fashion’s sake. That was pre-pandemic, though, and the health emergency paralyzed De Javier as much as anyone. “I was like ‘No way.’ I realized that the fashion world can just be wiped out, a virus can happen and then you are just done,” he said.

When celebrity and fashion icons such as Rihanna and Kim Kardashian West came knocking at De Javier’s door, he had a mood-boosting epiphany.

“After the first collection and COVID-19, I was really doubting everything, if it was worth investing more, my time, my health. And when I started getting orders from people I’d never thought I would one day work with, it just gave me so much strength and hope which I’m really grateful for and this pushed me to today,” the designer explained.

He focused on couture-like pieces for clients seeking custom-made items, until last September when he paraded a collection of ready-to-wear — hopefully ushering the brand into the next step of more commercial viability. Supposed to happen IRL, the runway presentation was held digitally with models of various body sizes and attitudes walking inside an emptied and light-filled white box.

With his next show, likely taking place for fall 2022 next February, he’s committed to grow the brand’s scope, replicating a showroom experience in Paris and linking with retailers to develop the brand’s commercial potential.