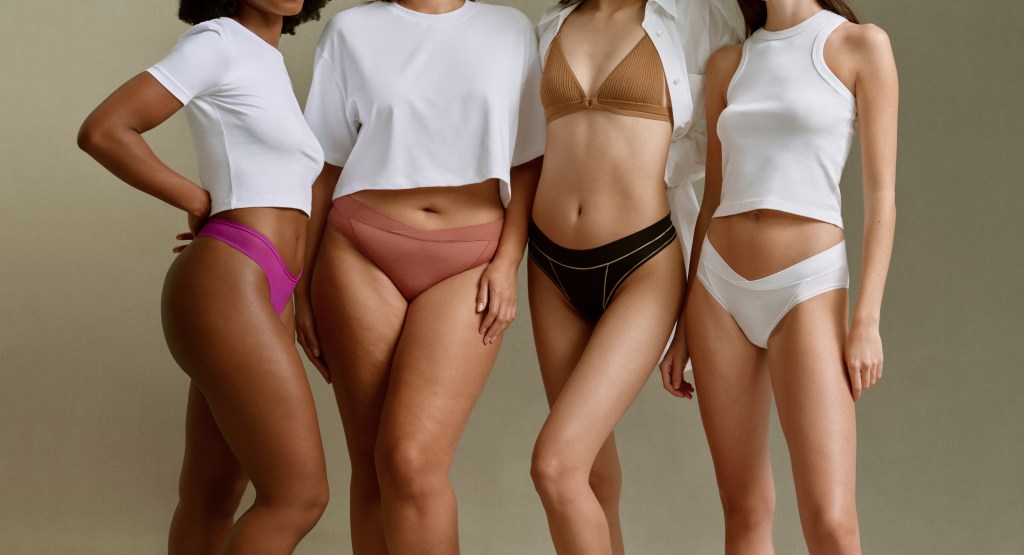 LONDON — Oria Mackenzie and Amy Tschenett have spent the last two years trialing panty samples, interviewing potential customers and scouring Reddit forums to understand all the ways that underwear brands, in their opinion, have failed women.

Next week they will be launching their own underwear label, Underdays, in a bid to address those perceived failings. No more scratchy lace or tags, advertising geared toward men, fussy packaging or fabrics that aren’t breathable.

Their mission is to build a “problem-solving brand” that caters to women’s every day needs — and become “the Calvin Klein of the new generation.”

“We want to appeal to the masses, but we still want to have an edge, our own aesthetic and a strong brand image. The way we approached the brand was bringing our luxury fashion experience into the everyday aspect of underwear, without making the product so elevated that it doesn’t feel reachable,” said Tschenett, who cut her teeth at Farfetch and Burberry.

The brand plans to make its debut with its own e-commerce platform and stick to a direct-to-consumer model in order to build its own community and “own the conversation with the customer” — which will involve as much playful content as it will educational stories around female hygiene, developed alongside a London-based gynecologist.

The two have been taking a leaf out of Glossier’s book with their brightly colored packaging, instantly recognizable swirly “U” logo and community-driven campaigns. To mark the launch they’re planning a sticker campaign that will see friends’ and customers’ bathrooms all over London filled with stickers that read “Underwear’s got a new face” and social media imagery featuring the brand’s earliest adopters.

Customers will also be encouraged to reuse the branded boxes that the underwear is packaged in — compact tube shapes in highly Instagram-able pops of color — to store things around the house and share snaps on social media.

“We’re taking time to be highly branded in the way Calvin Klein once was and the way Glossier is today and applying that to underwear. It’s about revolutionizing a sector in the same way Glossier did for beauty.

“That was really the vision when we started, because we both felt there was nothing like that happening in underwear,” said Mackenzie, who believes that, especially in the U.K., women have been stuck between high-street retailers like Victoria’s Secret and Marks & Spencer, or luxury brands like La Perla.

“There’s also some new niche underwear brands which look great, but the problem is they’re not comfortable. We wanted to create something that appealed to young working women and was made for everyday life — it doesn’t just look good on a selfie,” added Tschenett.

To that end, the duo decided to launch with three collections addressing different parts of women’s lives, including The Everyday, The Workout and The Lingerie.

The everyday style features breathable MicroModal fabrics that have been put under many wash tests to ensure that they are durable; the workout styles are made using recycled nylon and anti-microbial fabrics; while the lingerie features a stylish mix of mesh and silk microfiber.

“We wanted to simplify lingerie — we never use lace — and to create a design that still has this play on fabric and a fashion element. But the comfort is still there. With lingerie it’s either extremely expensive or if it’s cheap it’s horrible to wear, it’s scratchy, too tight, or there’s a million strings and you don’t know where they need go,” added Tschenett.

Underwear will be priced between 16 pounds and 22 pounds, which is “Calvin Klein positioning” according to the duo.

“It’s not high street in terms of going under 10 pounds, but we’re also not a La Perla, Wolford or Agent Provocateur, which go beyond 60 pounds,” said Tschenett.

The brand is also “two-thirds of the way there” in terms of sustainable fabric sourcing, with the duo disclosing that they have not yet found sustainable alternatives for the mesh and silk fabrics used in the lingerie styles. They said they’re constantly on the lookout for new innovations.

“We want to have an honest conversation. I think that that as a communication strategy is the way to go. It’s not about greenwashing and pretending to be something you’re not,” said Tschenett.

The company is also marking the launch with a campaign shot by fashion photographer Morgan Lay that captures Mackenzie and Tschenett’s vision of a brand that’s inclusive and carefree — with a sprinkle of high fashion.

A group of young women pose in the campaign wearing everything from trendy New Balance sneakers, basic white Ts and stylish tulle pieces.

“We used a mix of our own and the models’ clothes. It’s about the feeling that a woman can live her best life in her underwear, wearing her cowboy boots and panties around the house. It’s not about dressing for a man: that’s the spirit of Underdays,” added Mackenzie.

Feed Post - December 16, 2021 0
In such a transitional time for the company, with Marco Gobbetti’s takeover as chief executive officer around the corner, the Salvatore Ferragamo design team...